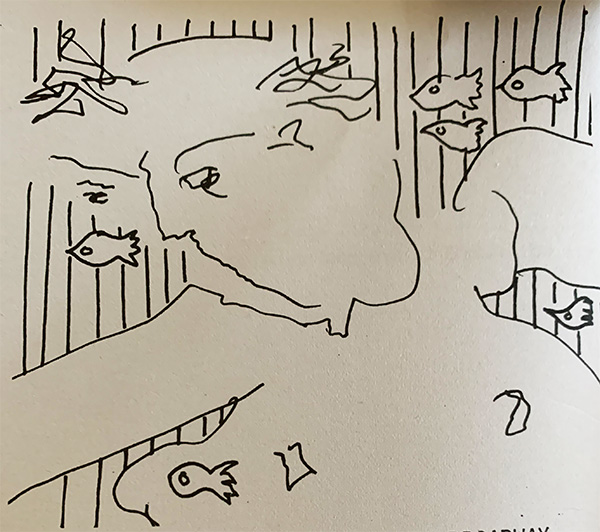 Goldfish swim by Hammersmith Broadway
Guilted lips, hips glinting gold
There's never been a time like this ...
Crocodiles are making this maypole dance!
Blink and blink again
Dominoes cascading
'She is' in giant letters
Stare out of the palm of your hand
Five fingers pointing to no gain ...
Weep for the skeleton keys.

Goldfish swim by Hammersmith Broadway
Scalpels cropping hair
Throw the next grenade
There's never been a time like this
Conductors selling tickets for a masqurade
Bombs and millionaires bought and sold
Black shirts and union cards played as at a poker game
Sequins and knee zips
Hearts pumping silver
Diamond studded knuckle-dusters
The God damned future has to be good.

Goldfish swim by Hammersmith Broadway
The lobsters are coming with their padlocks
The police revolt and the padding is being thrown out of the cells
There's never been a time like this
Securities setting on Northern boulevards
White handkerchieves sold free with every income tax form
Men acrobat to match the 'She is' esteem
This England. Its elms shawn in disease
Children operating abortions in daylight
A stump is better than a hand for a beggar
French lessons, tight jeans, and contact lenses
Carter, Brechnev, Callaghan
Propoganda for a long life, whisky and cream
Blink again and again
Weep for the skeleton keys.