During my teenager years - i gave up playing bach or beethoven - and learnt the joys of improvisation - and how time, space, and sensation of being creates a dialogue with playing what one feels. I had a piano teacher who gave me an hour and half every saturday to play on her grand piano, a short walk from my home in Nottingham. When at Trent Poly doing fine art - i was seduced by the sythesiser - Synthi A - and I created performance works for rooms with sliding doors, with 3 reel to reel tape recorders all connected to one tape and a Concerto for synthi and   oscilloscope - this was in 1970-1 and available to use in my compositions. This was perhaps related to the pioneer of electronic music  Tristram Cary -  (known for creating Doctor Who and Dalek music and sound effects) an English-Australian  composer who while working as a radar engineer for the Royal Navy during World War II, he independently developed his own conception of electronic and tape music. In 1973 I corresponded with Tristram - as I wanted input as to where to develop in experimental electronic music - and here is letter I had from Tristram Cary. Later in 1974-5 unfortunately my ears were blown out from sound, and when I was in post grad the Slade School of Art - where they had a computer in 1974 - if i played the piano all i could hear was a drum sound. So i I wanted to go to MIT to create computer controlled music installations. Over the years I had researched and listened to all the experimental composers at the time ( at Trent Poly - Michael Nyman was my visiting tutor - during thos glorious times wonderful times one could choose), and i would go to talks by contemporary composers. I contacted John Cage in New York to see if he had anything that could help me in going to MIT. Here is what John Cage sent me in 1995 - when I was at the Slade and living in London. 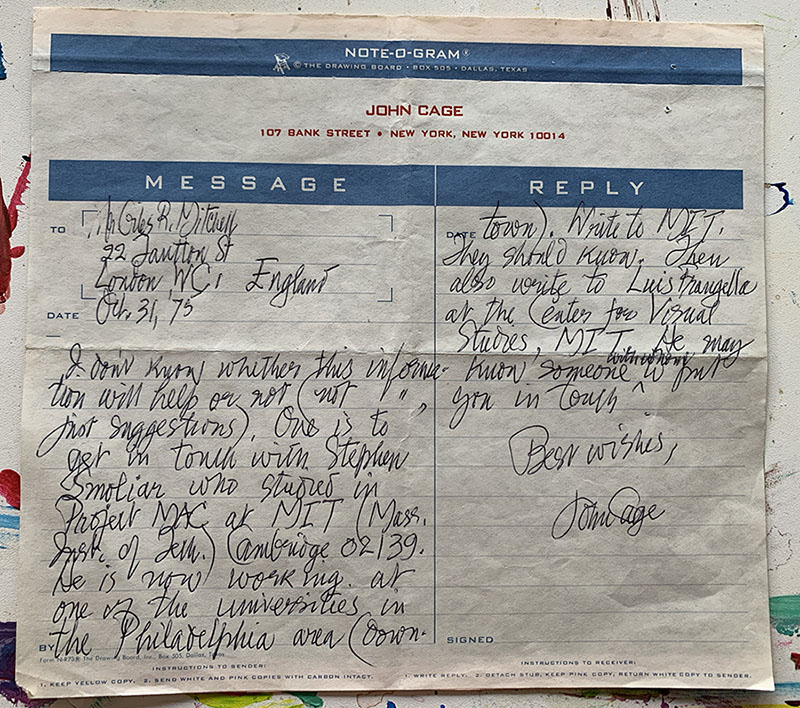